The Sanctuary of Ars is found in the sleepy, picturesque village of Ars-sur-Formans, near the major French city of Lyon.

Since the death of Jean-Marie Vianney, who was the parish priest of Ars until 1859, the mission of the Sanctuary is to welcome pilgrims, make known the life of Holy Curé (who is the Patron Saint of Parish Priests worldwide) and safeguard his memory in this holy place. Today, the Sanctuary of Ars welcomes 450,000 pilgrims a year.

What will I see when I visit –

Basilica of St. John Vianney – The former parish Church where St. John Vianney was Parish priest, now the Basilica which also houses his relics. After his death, the Basilica that Fr. Vianney dreamed of building was realised, adding on to the original 11th century Church which remains as the main nave of the new Basilica.

Reliquary of St John Vianney – Housed in the Basilica, pilgrims can view his preserved body in a glass shrine. The saint’s heart is enshrined in a smaller separate building known as the Shrine of the Cure’s Heart.

House where Fr Vianney lived – Immediately opposite the Basilica is the house where the saint lived. It is remarkably well preserved and just as Fr Vianney had left it. A guided audio leads pilgrims through the various rooms.

Who was Saint Jean Marie Vianney?

Born into a large farming family on the 8 May 1786 at Ecully near Lyon, Jean-Marie Vianney experienced a childhood marked by the fervour and love of his parents. The context of the French Revolution however, strongly influenced his youth: he made his first confession not in the local village church but in the living-room of the family home and also received absolution from a priest forced into hiding by the strict secular regime. Two years later he made his first communion in a barn during a clandestine Mass. At 17 years of age he chose to answer God’s call: “I want to win souls for the Lord” he says to his mother; however his father opposed his son’s decision for two years because he needed an extra pair of arms around the home and farm.

At 20 years of age, Jean-Marie started to prepare for the priesthood. Ordained in 1815, his first position was as curate at Ecully. In 1818 he was sent to Ars, there he awakened the faith of his parishioners not only through preaching but also through his prayers, meditation and his lifestyle. During this period Jean-Marie also restored and beautified the church, founded an orphanage named ‘Providence’ and took care of the poor. Very quickly his reputation as a confessor attracted many pilgrims coming to seek with him God’s forgiveness and peace of heart; more than 90,000 came in the last year of his life. Beset by many trials and struggles, he kept his heart rooted in the love of God and his brethren; his principal concern was the salvation of souls.

Father Vianney died on the 4 August 1859. He knew he would die one day as a “prisoner of the confessional”. Beatified on 8 January 1905, he was declared the same year ‘Patron of French priests’. Canonised in 1925 by Pius XI, he was proclaimed in 1929 as ‘Patron of all the Parish Priests Worldwide’. 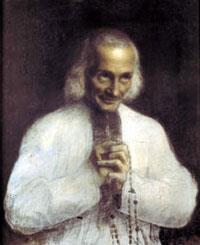