In the village of Santarém, just a half hour drive from Fátima, there occurred the Church’s second most famous Eucharistic Miracle after Lanciano.

In the year 1247, a woman married to a man who frequently committed adultery had turned in desperation to a sorceress to seek help. The sorceress demanded a Consecrated Host as payment for a magical potion which would solve her problem. The woman did as she was instructed and she went to the Parish Church of Saint Stephen, received communion and then as she was leaving the Church, removed the Host from her mouth and tied it in a knot in the veil covering her head. It was then that the Miracle occurred.

The Host suddenly began to bleed profusely. The blood flowed so heavily that the people in the streets inquired about her sickness. Frightened, she ran home and placed the Host still wrapped in the veil in a wooden trunk. That night the couple were awoken with bright lights emitting from the trunk. The parish priest was called and the Host was taken back in procession to the Church, where the Clergy, in order to stop the bleeding decided to seal it in a ball of melted bees wax.

Nineteen years passed and in 1266 when a canonical investigation was held, it was discovered that a second miracle had occurred; the Host had freed itself from the wax and was now in a small crystal ampoule.

Throughout the centuries many miracles have taken place involving the same Miraculous Host. Kings, Queens and Saints including Elizabeth of Portugal venerated the Relic and no fewer than half a dozen Popes granted indulgences to the Cult. Saint Francis Xavier also came on pilgrimage before travelling to India.

The Relics were scientifically analysed in 1997 for the 750th anniversary celebrations of the Miracle and proven to be genuine and of a supernatural origin. In the same year the Church of Saint Stephen of the Holy Miracle was recognised as the Shrine of the Most Holy miracle.

Guided visits to the Shrine which often include celebration of the Eucharist in the Church are included as optional day trips whilst staying in Fatima. 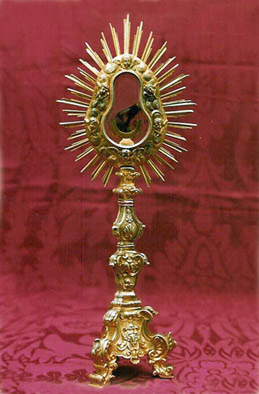